Japan quickly launched itself onto the path of the industrial revolution in the Meiji Era. The Besshi Copper Mine which opened in 1691 has had new machine equipment introduced, a ropeway and railroad tracks laid, which increased in copper output, and in order to establish a commensurate refining capacity, the refinery in the Besshi Mountain was relocated to the coast of Niihama.

However, sulfur dioxide gas discharged from the prosperous Niihama refinery spread toxins to the crops in the surrounding areas, creating unforeseen circumstances. There were no methods to recover sulfur dioxide gas at the time, and it was extremely difficult to resolve this technically, forcing Teigo Iba, Sumitomo's then chief administrator, to relocate the refinery to Shisaka Island. Shisaka Island is an uninhabited island around 20 km from Niihama. The thinking was that relocating the refinery would disperse the sulfur dioxide gas across the Seto Inland Sea and eliminate the smoke hazards. However, in order to build a refinery on an uninhabited island, ports, roads, housing and infrastructure needed to be established at enormous cost. The total actual construction costs was around 1.7 million yen, equivalent to 2 years net earnings of the Besshi Copper Mine at that time, a huge gamble for the company.

The smoke hazard problem was a serious threat to the farmers in the surrounding areas, yet the copper industry was central to Japan resisting the global powers at the time, meaning that the mine could not be abandoned. Given this dilemma, Mr. Iba would not clear up this problem through compensation, demanding that a genuine forward-looking solution be found even if it cut into the company's profits in order to eradicate the smoke hazard.

Growth of Smoke Hazard Problem and Decision to Solve It

However, the smoke hazards from the Shisaka Island Smelter, which began operating in 1905, contrary to expectations, spread across the entire Toyo region of Ehime Prefecture. The sulfur dioxide gas, which had been expected to be dispersed across the Seto Inland Sea, was blown directly by the wind to the Shikoku mainland.

The farmers demanded the smoke hazard be eliminated and they be compensated for damages, and violent protests erupted. Masaya Suzuki, the Chief Administrator of Sumitomo at that time, worked feverishly to promote research in the Sumitomo family on "methods to eliminate the smoke hazard, and establish a governmental investigative committee for this research. If these methods could be invented, the Sumitomo family was prepared to pay for and build a facility to remove the smoke hazards without any misgivings even if the cost would be higher that having to make restitution for damages caused by the smoke hazard." Sumitomo would fight it out until the smoke hazard problem was fully resolved. While "CSR (Corporate Social Responsibility)" is often cited these days, Sumitomo management was already aware of this 100 years ago.

A compact between Sumitomo and the affected farmers was concluded in 1910 proposing compensation for damages and operational limits to regulate sulfur dioxide gas emissions, while various technical improvements were introduced to overcome the smoke hazard.

First, in order to reduce the sulfur content from the raw materials, the Sumitomo Fertilizer Facility was opened in 1913 which created sulfuric acid from sulfur contained in sulfide materials, then superphosphate was manufactured. Also, many tests and studies were conducted on eliminating and reducing the smoke hazard.
The sulfur quantity emitted from the Shisaka Smelter was reduced in half from where it was in 1919 by 1926 based on these measures.

Among the efforts to overcome the smoke hazard, flue gas emitted traditionally from 1 smokestack was separated to multiple smokestacks, dispersed using fans and discharged into the atmosphere in order to reduce the concentration of sulfur dioxide gas and lessen the smoke hazard. This method required a massive infusion of 350,000 yen, and began in 1914 by building 6 smokestacks at a location 42 meters above sea level and installing fans.

However, when they were put into operation, the sulfur dioxide gas cooled by the fans immediately settled when emitted from the smokestacks, covering the island and was carried by air currents in this coagulated form to affected regions across the oceans, inviting a massive smoke hazard even greater than that posed with the traditional single smokestack. This method was ultimately shown to have no effect, and the use of the 6 smokestacks was halted after only 2 1/2 years. 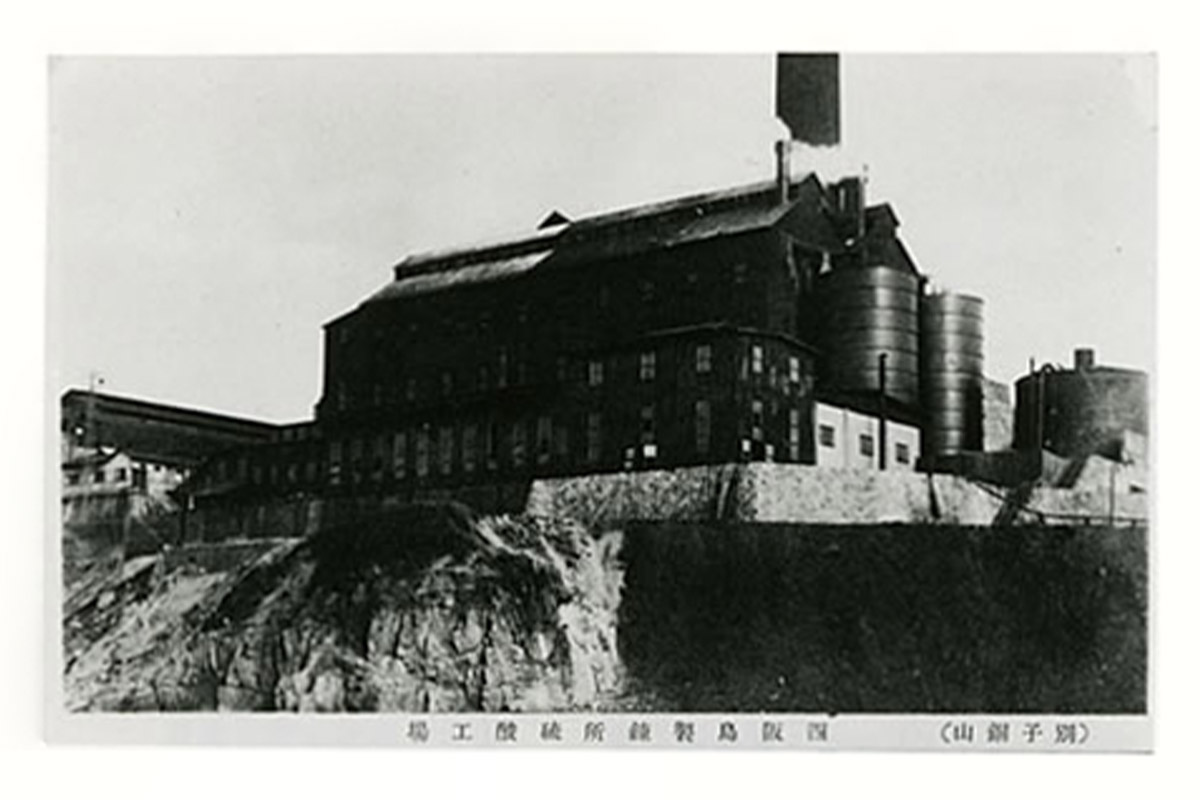 The column type sulfuric acid manufacturing method (method of turning sulfur dioxide gas to sulfate using nitric acid) invented by Mr. Petersen, a German, at the end of the Taisho Era, was introduced, which provided the chance to eliminate the smoke hazard at the Shisaka Island Smelter. A formal patent licensed contract with Mr. Petersen was concluded in 1927, construction began then milling operations were changed which reduced the sulfur dioxide gas quantity emitted, diluted its concentration, making the smoke hazard according to real damage disappear.

Construction on the Neutralization Plant began in 1937. This plant would neutralize diluted sulfur dioxide gas using ammonia water emitted from the smelter smokestacks and collect this as sulfur dioxide ammonia solution. This facility was completed in July 1939, which made the sulfur dioxide gas completely disappear and eliminated the damage caused by the smoke hazard. This was 34 years after the Smelter was relocated to Shisaka Island.